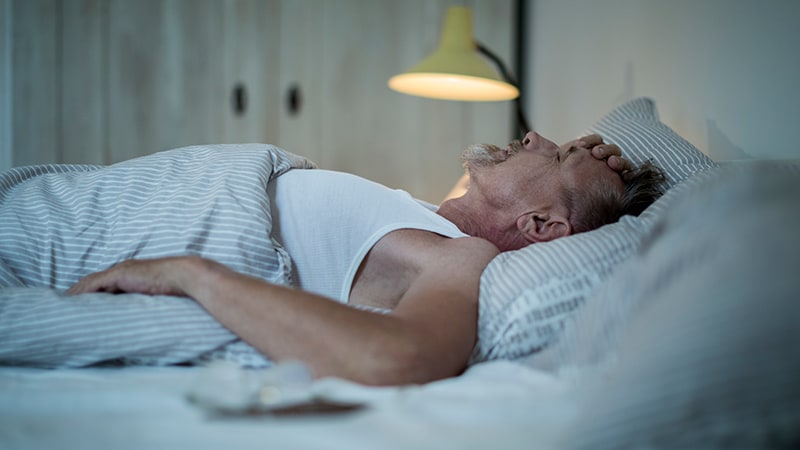 Onset of nightmares or distressing dreams in older adults may be a very early sign of Parkinson’s disease (PD), new research suggests.

Investigators analyzed 12-year follow-up data on more than 3800 older men and found those who reported distressing dreams at baseline had a twofold higher risk for incident PD at the end of the follow-up period.

Although frequent distressing dreams were associated with a more than threefold higher risk for PD during the first 5 years after baseline, no further effect was found during the subsequent 7 years.

“While we need to carry out further research in this area, identifying the significance of bad dreams and nightmares could indicate that individuals who experience changes to their dreams in older age, without any obvious trigger, should seek medical advice,” study investigator Abidemi Otaiku, BMBS, NIHR academic clinical fellow in neurology, University of Birmingham, and specialty registrar in neurology at Birmingham City Hospital, United Kingdom, said in a press release.

The findings were published online June 8 in eClinicalMedicine.

It is estimated the global prevalence of PD may double within the next decade, making the identification of individuals at high risk for developing the disorder “an urgent priority,” Otaiku writes.

Cross-sectional studies “have shown that PD is also associated with alterations to the phenomenology of dreaming,” he notes. This includes changes to the content of normal dreams, such as increased negative emotions, increased physical aggression, and a higher prevalence of animal characters, and “the development of rapid eye movement sleep behavior disorder (RBD) or ‘dream enactment behaviors’ (DEBs),” he adds.

Individuals with PD are also about 4 times more likely than adults in the general population to experience frequent nightmares.

To explore the potential association between frequent distressing dreams and risk for later development of PD, Otaiku turned to data from the Osteoporotic Fractures in Men (MrOS) trial. This observational, longitudinal cohort study enrolled 5994 community-dwelling men 65 years and older at six US-based clinical centers. The study included up to 12 years of follow-up for incident PD.

Baseline assessments were conducted between March 2000 and April 2002, with visits occurring at regular intervals until the period May 2014 to May 2016.

The current study used data from the earliest visits in which sleep was measured. It included participants free from PD at baseline and who completed a question found in the Pittsburgh Sleep Quality Index (PSQI): “During the past month, how often have you had trouble sleeping because you have had bad dreams?”

After excluding participants with missing data or those lost to follow-up, the final sample consisted of 3818 men (mean age, 77 years), of whom 2.4% (n = 91) developed PD during a mean of 7.3 years of follow-up.

At baseline, the incident PD group were more likely to experience depression and were less likely to have sleep maintenance insomnia. Otherwise, no differences in characteristics were found between participants who did and did not go on to develop PD.

The fully adjusted logistic regression model comparing participants with and without distressing dreams at baseline showed those with frequent distressing dreams had a risk for incident PD that was twice as high as those without the dreams (odds ratio [OR], 2.01; 95% CI, 1.1 – 3.6; P = .02).

A stratified analysis dividing the follow-up period into segments showed frequent distressing dreams were associated with more than a threefold higher risk for incident PD during the first 5 years after baseline (OR, 3.38; 95% CI, 1.3 – 8.7; P = .01).

Although participants with frequent distressing dreams in this study were more likely to be depressed and have worse cognitive function, “after adjusting for these characteristics as covariates, distressing dreams remained significantly associated with incident PD,” Otaiku reports.

“This suggests that distressing dreams may be a prodromal symptom of PD, even in individuals with normal cognition and who are not depressed,” he writes.

Otaku adds it is possible that early neurodegenerative changes in the right frontal brain regions could contribute to the nonmotor symptoms of distressing dreams.

A Reasonable Addition to PD Screening

Commenting for Medscape Medical News, Rebecca Gilbert, MD, PhD, chief scientific officer, American Parkinson Disease Association, said it is “possible that including distressing dreams in a screen with other prodromal symptoms could produce a reasonable way to screen people for an increased risk for PD.”

Knowing that a patient is at increased risk for developing PD is “important for at least 2 reasons,” said Gilbert, who was not involved with the study. One is that “it encourages people to live healthier lives, such as adopting better exercise practices, which may be neuroprotective in PD.”

It also “establishes a cohort of people at high risk for developing PD who could participate in clinical trials of compounds that may prevent or delay onset of PD,” said Gilbert, who is also an associate professor of neurology at Bellevue Hospital Center in New York City.

“Eventually, a compound that slows down progression of PD will be discovered, and when that happens it will be essential to find the people at high risk of developing PD,” she added. “Distressing dreams and other prodromal symptoms could help identify who those people are.”

The current study received no funding. The Osteoporotic Fractures in Men study is supported by various divisions of the National Institutes of Health and are detailed in the original paper. Otaiku and Gilbert have reported no relevant financial relationships.

Cognitive Dissonance in the Medical Profession
Heart disease, stroke, diabetes could increase dementia risk, study suggests
CDC says gay and bi men in Florida need the meningococcal vaccine, to keep them safe in ‘worst’ outbreak in US history
Doctor Reacts to Destructive TikToks
Is What You Call Probable…Impossible?